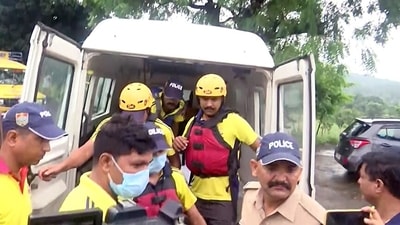 New Delhi: The 19-year-old woman murdered in Uttarakhand died due to drowning, according to the draft autopsy report. The report also said that the woman had blunt force trauma.

The autopsy was done at the All India Institute of Medical Sciences, Rishikesh. The report said, “Details of injuries and other findings will be given in the detailed post-mortem report.”

On Saturday morning, the body of the woman was recovered by the state disaster response force from the Chilla canal in which she was thrown by the three accused.

The three accused were arrested by the police on Friday following widespread outrage over the murder of the woman.

On Monday, the key accused, Pulkit Arya, the son of expelled BJP leader Vinod Arya, had filed a missing complaint with the revenue police, from which the matter was transferred to the regular police on Thursday. Protests erupted across Uttarakhand on Saturday, with angry people hitting the streets demanding capital punishment for the accused.

The police in its investigation have found that the woman was being pressurised to enter prostitution and they are in possession of WhatsApp chats that corroborate the fact, Pauri Garhwal SSP Yaswant Singh said on Saturday.

The accused was angry as the victim had revealed those chats to some of her friends and colleagues, he said. The three accused and the woman entered into an altercation in Rishikesh on Monday evening over the same issue, following which the accused, who were drunk at that time, threw the woman in the Chilla canal, the police said. Then they concocted a story about the woman’s disappearance to mislead the cops and filed a missing complaint with the police.

The state government also removed Ankit Arya from the post of Deputy Chairman of the Uttarakhand Other Backward Classes Commission. The Dhami government also constituted an SIT to probe the matter.