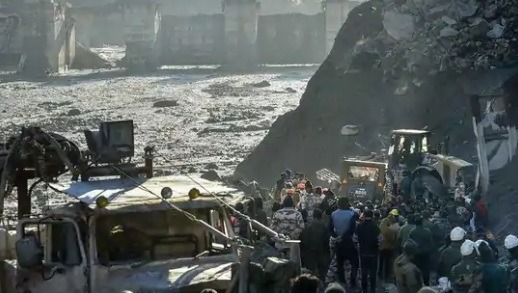 The scientists, belonging to the Snow and Avalanche Study Establishment (SASE) of the Defence Research and Development Organisation (DRDO), were flown to the Uttarakhand capital on Sunday night.

“A team of scientists of DRDO-SASE, flown in last night to Dehradun, is leaving for Joshimath area for surveillance and reconnaissance,” a Home Ministry spokesperson said on Monday.

A portion of the Nanda Devi glacier broke off in Uttarakhand’s Chamoli district on Sunday, triggering an avalanche and a deluge in the Alaknanda river system that washed away hydroelectric stations, leaving at least 10 people dead and 143 others missing.

The sudden flood in the middle of the day in the Dhauli Ganga, Rishi Ganga and Alaknanda rivers, all intricately linked tributaries of the Ganga, triggered widespread panic and large-scale devastation in the high mountain areas.

The burst glacier also swept away roads and forced authorities to evacuate villages.