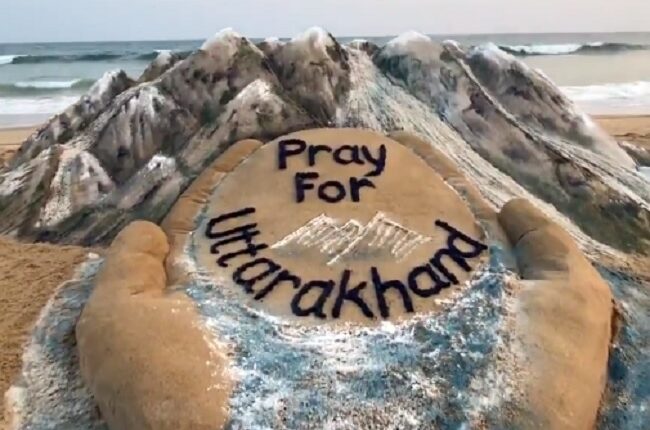 Puri: Internationally acclaimed sand artist Sudarshan Pattnaik extended his feelings towards the in the wake of massive floods triggered by a glacial burst in Uttarakhand.

The artist prayed for everyone’s safety in the affected areas through a sand art at Puri sea beach in Odisha.

Praying for everyone’s safety in the affected areas. My SandArt with message #PrayForUttarakhand at Puri beach. pic.twitter.com/Tj6vpmVld0

Uttarakhand is struggling with floods after a portion of the Nanda Devi glacier broke off in Chamoli district of the state on Sunday.

The sudden flood in the middle of the day in the Dhauli Ganga, Rishi Ganga and Alaknanda rivers — all intricately linked tributaries of the Ganga — triggered widespread panic and large-scale devastation in the high mountain areas.

Most of the missing persons are reportedly workers of two NTPC power project — Tapovan-Vishnugad hydel project and the Rishi Ganga Hydel Project — which faced the flood fury and were swept away in the gushing waters.