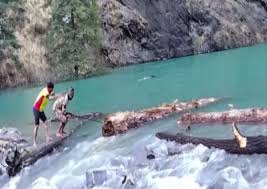 New Delhi: The Indo-Tibetan Border Police (ITBP) personnel along with State Disaster Response Force (SDRF) personnel have widened the flow of the lake at Rishiganga.

It was widened by 15ft to prevent a repeat of the Uttarakhand tragedy. The glacial lake was formed upstream of Tapovan over Rishiganga following the devastating flash flood.

Meanwhile, the death toll in the Uttarakhand glacier burst incident has reached 70 after the recovery of two more bodies from the debris.

The lake is situated at a height of 14,000 feet in the Himalayas in the Chamoli district.

On February 20, ITBP and DRDO teams completed their inspection of the natural lake formed in the upper reaches.