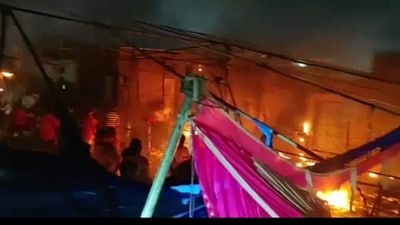 Uttar Pradesh: Three people have so far died in a pandal fire that broke out in Uttar Pradesh’s Bhadohi – about 280 km from state capital of Lucknow – on Sunday. The incident took place at a Durga Puja pandal in Aurai town of Bhadohi district, officials said.

Around 150 people were said to be present at the event when the fire broke out during the Aarti session to mark the seventh day of Navratri festivities or Saptami.

Two boys (aged 12 and 10) and a 47-year-old woman lost their lives in the tragedy, Bhadohi DM Gaurang Rathi said on Monday. Following the incident, nearly 55 people were admitted to hospitals on Saturday, of which 22 people were said to be critical at the time and reeling with severe burn injuries.

“Two more people. Who got burnt in Durga-Puja-Pandaal-fire- tragedy that was reported in Bhadoi’s Narthua village on late Sunday night, succumbed to the burnt injuries,” the official told Hindustan Times.

“This takes the total number of deaths in the incident, in which around 64 people suffered burnt injuries, to three.”

Naveen Kumar (10), son of Umesh Kumar who hails from Baari village, died on Monday morning while undergoing treatment in Varanasi. Jaya Devi (47) was declared brought dead by the doctors on Sunday night. Ankush Soni (12) succumbed at a Bhadohi hospital on Sunday night.