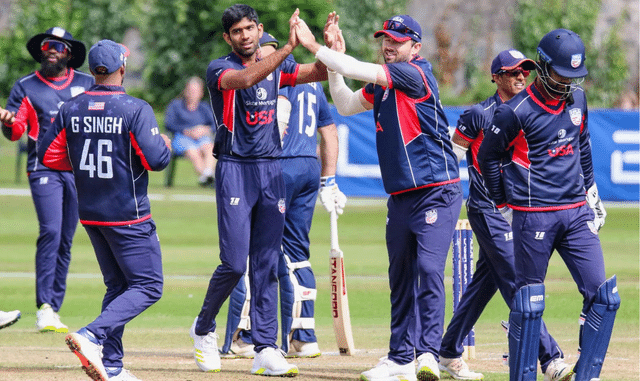 The United States of America have given their Cricket World Cup qualification hopes a huge boost after a thrilling two-wicket win over Scotland in Aberdeen.

Needing 22 off the final nine deliveries at Mannofield Park, Jaskaran Malhotra took charge, importantly keeping the strike for the final over to wrestle victory. Scurrying for a winning single off the penultimate ball, Malhotra’s partner Jessy Singh won a footrace against Safyaan Sharif, with the Scottish quicks underarm throw not in time to run Singh out.

The win moves the Americans above UAE in third place on the League 2 table, and in an automatic qualification spot for next year’s Cricket World Cup Qualifier for India 2023.

Monank Patel’s team crucially claimed points against UAE earlier in the Aberdeen tri-series, again sneaking home in the last over in a tense one-wicket win. The side picked up five points on their trip (two wins and a no-result), with the wash-out the only point on the trip for UAE.

Calum MacLeod’s 133* from 144 balls in the defeat to USA may have been in vain for the Scots, though the right-hander’s stellar run of form was the catalyst of three victories on the home leg, making them odds-on favourites to top the group.

Making scores of 76 and 77 in the two matches against UAE in the tri-series, MacLeod’s 117 in the first meeting with USA helped the hosts chase down 296.

The Scots sit four points back from first-place Oman, though the Omanis have played all 36 matches in the competition. It means just three wins in the final eight games for Richie Berrington’s side would likely mean they finish top of the group.

While the USA and UAE currently jostle for third spot, Namibia (fifth, 18 points) have 10 and eight matches in hand over the two sides respectively, and enjoy several home series for their late charge. Nepal (sixth, 17 points) also have time on their side, though need to hit the ground running under new coach Manoj Prabhakar.

The bottom four of League 2 are not out of the race, though they must go through a six-team playoff, where they are joined by the winners of each Challenge League group.

Earlier this week Jersey claimed their spot in the playoff after winning Challenge League Group A, brushing off challenges from Hong Kong and Uganda. In the other group, Canada hold top spot as the teams play their final five matches in Malaysia later this year.