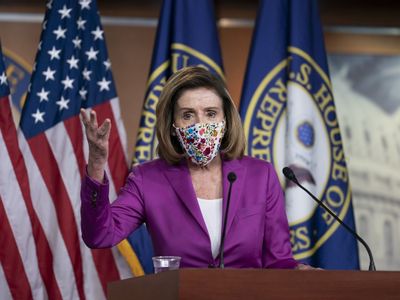 US Speaker vows to impeach President Trump, brands him as ‘dangerous’

Pelosi has called Washington policymakers to impeach Trump from office by invoking the 25th Amendment.

She told reporters that if the 25th Amendment is not invoked against Trump, Congress will move forward with the impeachment of the President.

Pelosi said if the vice president and the Cabinet do not act, the Congress may be prepared to move forward with impeachment that is the overwhelming sentiment of my caucus and the American people.

She branded President Trump as “a very dangerous person”.  Pelosi said it’s an emergency of the highest magnitude that he’s removed from the officer immediately.

Several lawmakers have slammed US President Donald Trump for inciting violence, with some calling for his immediate impeachment and removal.

Meanwhile , President Trump has assured smooth transition of power. His assurance comes a day after his supporters stormed the Capitol Hill.

At least four people died and several others injured after thousands of angry supporters of President Trump stormed the US Capitol and clashed with police on Wednesday.

3rd Test: Australia All Out For 338 In 1st Innings