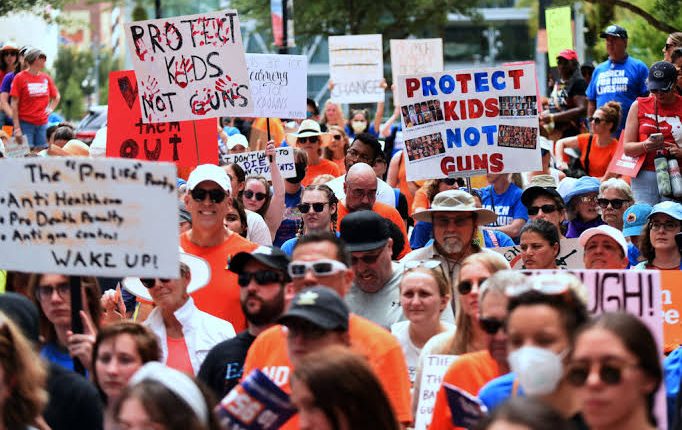 Washington: The US Senate voted 65-33 to approve bipartisan gun-safety legislation that is hailed as the biggest breakthrough on the issue in three decades.

The vote came the same day the Supreme Court struck down a New York law that required people to show a special need to carry a handgun in public, ruling for the first time that the Second Amendment protects gun rights outside the home.

The dueling actions, occurring across the street from one another, underscore the deep divisions that remain in the country on gun policy against the backdrop of recent massacres at an elementary school in Uvalde, Texas, and a grocery store in Buffalo, New York, where a total of 31 people were killed last month.

It also makes significant changes to the process when someone ages 18 to 21 goes to buy a firearm and closes the so-called boyfriend loophole, a victory for Democrats, who have long fought for that.

The package amounts to the most significant new federal legislation to address gun violence since the expired 10-year assault weapons ban of 1994 — though it fails to ban any weapons and falls far short of what Democrats and polls show most Americans want to see.

There were a few dozen people in the Senate gallery ahead of the final vote. Senators had noted there were gun violence survivors, family members and groups in attendance to watch the historic vote in the chamber.

The vote on the federal gun safety bill came on the same day as the Supreme Court struck down a New York gun law enacted more than a century ago that places restrictions on carrying a concealed handgun outside the home.

The ruling highlights the conflicting political forces surrounding the issue at all levels of government, as the judicial branch implements the widest expansion of gun rights in a decade, happening right as the legislative branch appears on track to pass its most significant gun safety package in almost 30 years.

Nora Fatehi Gets A Shoutout From Victoria Beckham