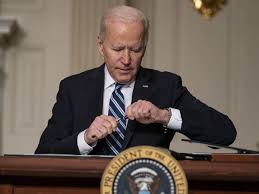 He has signed a series of executive orders and took the initiative to address this challenge at the earliest. Biden said he considers climate change as one of the most pressing threats of the era.

The executive order will help strengthen that commitment by working with other nations to support the most vulnerable to the impact of climate change.

Biden said a summit of world leaders will be convened to address the climate crisis on Earth Day this year. He said he will host an early Leaders’ Climate Summit aimed at raising climate ambition and making a positive contribution to the 26th United Nations Climate Change Conference of the Parties (COP26) and beyond.

The executive orders signed by Biden will put the country on an “irreversible path” to a net-zero economy by 2050. Biden said the US has already waited too long to deal with the climate crisis. He said he can’t afford to wait any longer.

The US President  said the United States will immediately begin the process of developing its nationally determined contribution under the Paris Agreement.

Cannes Film Festival postponed to July 2021 due to Covid-19