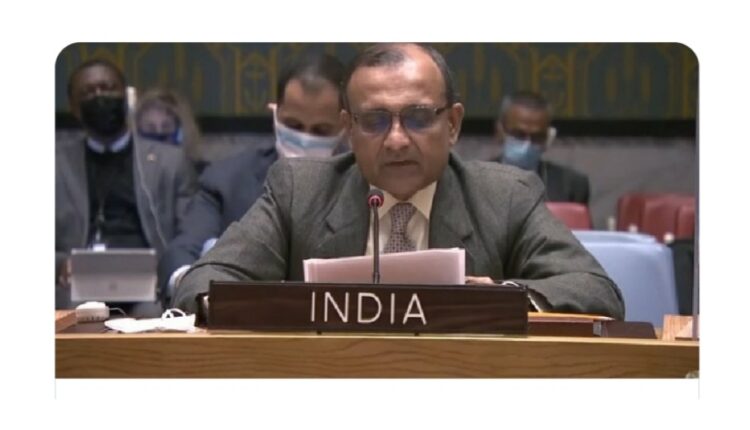 New Delhi: India on Tuesday expressed deep concern over the escalation of tensions along Ukraine’s border with Russia, and called on all parties to exercise “utmost restraint” and to step up diplomatic efforts to find a “mutually amicable solution” to the crisis in eastern Europe.

In its statement at the emergency meeting at the United Nations Security Council, Indian Ambassador TS Tirumurti expressed “deep concerns” over the recent escalation of tension along the border of Ukraine with the Russian Federation. He said these developments have the potential to undermine the peace and security of the region.

“We have been closely following the evolving developments relating to Ukraine, including developments along the eastern border of Ukraine and the related announcement by the Russian Federation,” Tirumurti said.

“The escalation of tension along the border of Ukraine with the Russian Federation is a matter of deep concern. These developments have the potential to undermine peace and security of the region,” he said.

Tirumurti sought “restraint on all sides” and reiterated India’s call for the immediate de-escalation of tensions while “taking into account the legitimate security interests of all countries and aimed towards securing long-term peace and stability in the region and beyond”.

He also reiterated India’s contention that that the issue “can only be resolved through diplomatic dialogue”, and said: “We need to give space to the recent initiatives undertaken by parties which seek to diffuse tensions.”

In this context, Tirumurti welcomed “intense efforts” to address the situation, including through the trilateral contact group and under the Normandy format. He said the Minsk Agreements provide the basis for a negotiated and peaceful settlement and added that all parties need to make “greater efforts to find common ground to facilitate the implementation of the provisions of the Minsk Agreements, including key security and political aspects”.

“We need parties to exert greater efforts to bridge divergent interests. We cannot afford to have a military escalation,” Tirumurti said, highlighting the need for constructive diplomacy to avoid scaling up of tensions.

Tirumurti further reiterated India’s focus on the well-being of more than 20,000 Indian students and nationals living and studying across Ukraine, including in its border areas.

“In conclusion, we strongly emphasise the vital need for all sides to maintain international peace and security by exercising the utmost restraint and intensifying diplomatic efforts to ensure that a mutually amicable solution is arrived at the earliest,” he said.

Unlike most other members of the UN Security Council, India has stopped short of criticising the latest actions of Russia, a close strategic ally and defence partner, along the borders of Ukraine. It has insisted on a diplomatic solution to the crisis that ensures the “legitimate security interests of all countries”.