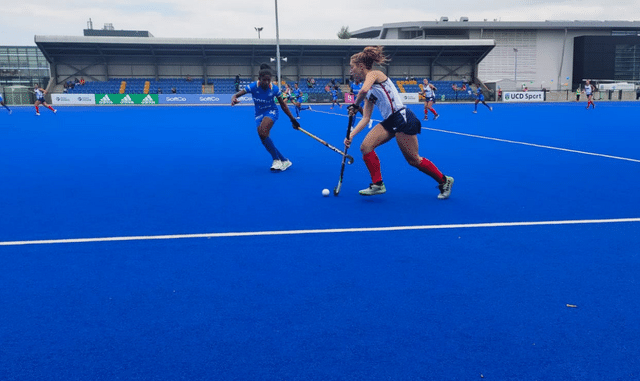 Dublin: Indian Junior Women’s Hockey Team on Thursday, 23 June 2022, recorded a comprehensive 4-1 victory against the United States in the Uniphar U23 5 Nations Tournament, here, in Dublin, Ireland. Annu (49′, 52′) netted a brace, while Nikita Toppo (48′) and Vaishnavi Phalke (58’) scored one goal each for India. Hannah Miller (46’) scored the lone goal for America.

The Indian Junior Women’s Hockey Team got out to a fast start, winning the first Penalty Corner of the game within the first 10 minutes. Although it didn’t materialize, India made its intentions clear as they tried to attack early in the game to grab the lead. Despite their best efforts, neither India nor the United States were able to break the deadlock as the first quarter came to an end.

India took charge early in the second quarter and were rewarded for their efforts when they won their second PC. However, the United States’ defence held firm and prevented India from converting it. Following that, the USA mounted a counter-attack, which resulted in their first Penalty Corner of the game, but it did not result in a goal, forcing both teams to enter the halftime break with no advantage.

Similar to the first and second quarters of the game, India and the United States fought it out to control the pace of the game in the third quarter without producing any clear opportunities. However, the Indian team nearly broke the tie as they won yet another PC, but they fell short of gaining the lead.

The US team upped their attacking as the fourth quarter began in pursuit of their first goal, and it paid off as they won a PC and shortly Hannah Miller scored the game’s first goal to put them ahead. However, India did not have to wait long for an equalizer, as Nikita Toppo levelled the game in the 48th minute. A minute later, Annu added another goal to give India the lead. After that, India did not look back as they earned three back-to-back PCs. The game moved further away from the USA when Annu scored her second goal in the 52nd minute. The United States had an opportunity to close the gap after winning a PC, but they were unable to convert it. Vaishnavi Phalke scored the final goal of the match in the 58th minute as India defeated USA 4-1.