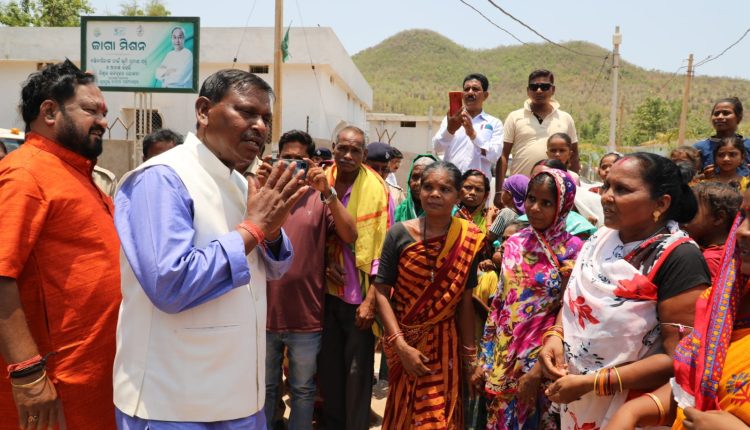 Bhubaneswar: Union Minister of Tribal Affairs Arjun Munda arrived in Kalahandi, Odisha today on a two-day visit. On the first day, the minister visited the Skill Development Extension Centre in Bhawanipatna along with M.P. Loksabha (Kalahandi) Basanta Kumar Panda and other dignitaries.

The minister interacted with the trainees and enquired about the details of training being imparted to them. The District Employment Officer, Kalahandi apprised the minister that 35 girl trainees comprising of 25 STs and 14 Divyang trainees are undergoing training in Sewing Machine Operator trade under DDU-GKY scheme.

It is noted that the trainees will get 100% placement after completion of their training. The interaction session was also attended by about 30 trainees of Skill Development Centre, Mukhiguda, Kalahandi who were undergoing training under DDU-GKY scheme. Shri Munda also interacted with beneficiaries of PM Awas Yojana.

The minister enquired about the placement details of the trainees of the Skill Development center and advised them to pursue higher studies while pursuing study in “Earn while Learn” mode. Later, Shri Munda visited the Government High School in Kesinga and expressed his happiness over enrolment of 41 percent tribal students in the school.

The Minister later inspected the medical college and hospital being built in Bhawanipatna in line with the vision of Prime Minister Shri Narendra Modi to have Medical Colleges in every district of the country. The project is being built on 34 acres of land by the Tata Group. The Minister reviewed the progress of the work with the officials of Tata Project.

Shri Munda during his visit interacted with a women self help group in Sukunbhata village in Bhawanipatna and enquired about the welfare scheme being implemented by the central government in the area. This women’s group is maintaining rural park in Sukunabhata. They informed the minister that after getting LPG connection under Ujjwala, toilets and pucca houses their lives have become easier.

Shri Munda also visited the Maternal and Child Care Center in Kesinga and further expressed his satisfaction that the healthcare center has been conducting sickle-cell screening, which is important to eradicate the disease in the tribal dominated districts. On Day-2 tomorrow, the minister is scheduled to conduct more field visits in the district.