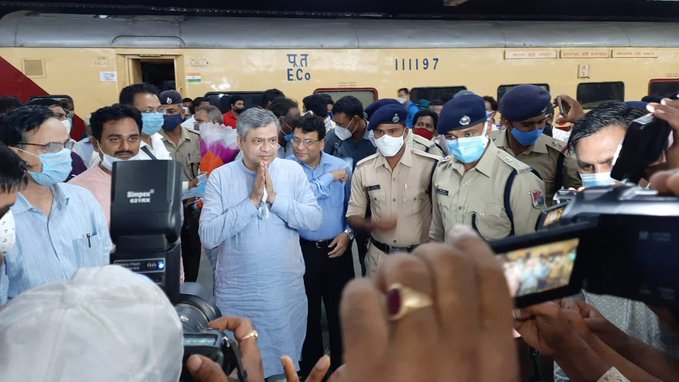 Rayagada: Union Minister of Railways Ashwini Vaishnaw arrived in Rayagada in a train from Bhubaneswar. He was received by BJP workers, Rayagada district administration and railway officials.

He is scheduled to attend Jan Ashirwad Yatra & later meet beneficiaries of Ujjwala and PMAY.

Besides, Vaishnaw spoke to the passengers of a train from Bhubaneswar to Rayagada and took their feedback about railway services.

He was also seen explaining co-passengers about supply chain and shared PM Narendra Modi’s vision about Railways and development in the country.

Ashwini received a grand welcome by local party workers at Rayagada with a traditional tribal dance. Following it, he visited the temple of Maa Majhighariani, the presiding deity of Rayagada, and sought her blessings for the Yatra.

Worth mentioning, the Railway Minister is on a four-day visit to Odisha.