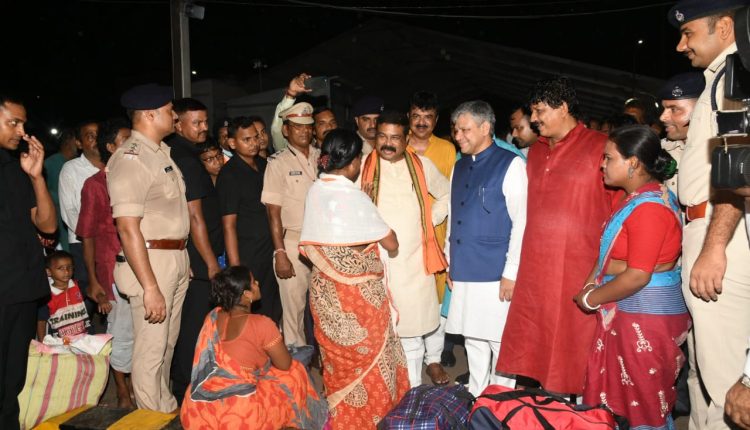 Puri: Union Minister of Education, Skill Development and Entrepreneurship Dharmendra Pradhan and Minister of Railways, Communications and Electronics & Information Technology, Ashwini Vaishnaw during their two days visit to Odisha reviewed the Rath Yatra arrangements by Railways for the convenience of pilgrims during Rath Yatra period. Vaishnaw also wished the people and pilgrims and their families for a very happy and memorable Rath Yatra.

Greetings to the people of Odisha and pilgrims, devotees coming to witness Rath Yatra at Puri, Railway Minister Ashwini Vaishnaw said that, this year Railways have made elaborate Rath Yatra arrangements for the benefit and convenience of pilgrims at Puri Railway Station.

Vaishnaw said that, for the first time, 205 Special Trains are being run during the Rath Yatra period. With this, more than 300 regular trains will also be run. Railway predicts that more than 10 lakh passengers will be able to travel in more than 500 trains to and from Puri.

For the security of the passengers, more than 100 CCTV cameras have been installed along with drone cameras for monitoring security arrangement. For this, Railways have deployed more than 600 RPF personnel and 200 Rail Volunteers for safety & guidance of pilgrims.

More than 40 Ticket Booking Counters, 10 UTS based Hand-Held Counters and many Mobile Counters have been installed so that there is no problem in getting tickets and passengers will get easy access. For the first time, arrangement has been made to sell Railway Tickets in Road Vehicle.

Huge covered space has been made by Railways to accommodate 15,000 devotees with Food Court, Drinking Water and Toilet facilities.

Provisions have been made for a Battery Operated Car for Senior Citizens and disabled people.

Railway Minister also informed that pilgrims and passengers can relax at night in the Mela Shed and Free Food has been arranged for 50,000 needy pilgrims.