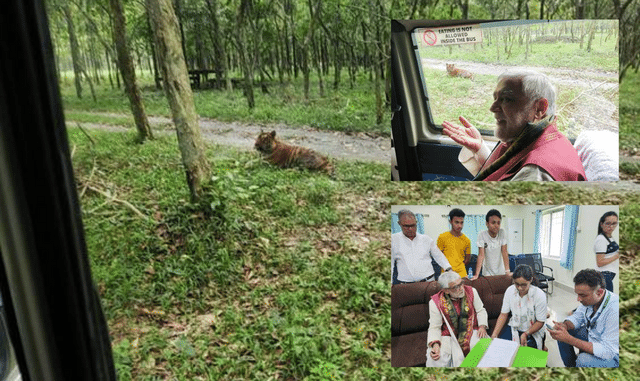 On his way back from Gangtok, he inspected the safari. During this, Union Minister of State Shri Choubey adopted tiger to spread awareness among the people under the Adoption Program. He said that he has seen the fierce form of nature in Kedarnath Dham. Everyone should be aware for the protection of nature. so that such incidents do not happen. Under the leadership and guidance of Prime Minister Shri Narendra Modi, the Union Government has taken comprehensive steps for the conservation of animals.

On the occasion of “Azadi ka Amrit Mahotsav”, with awareness among people, he has adopted a tiger in memory of the victims of Kedarnath tragedy. He said that animals have a significant role in the balance of the environment. Their protection is essential. For this, there is also a need to make people aware regularly.

On this occasion, the officers were directed to conduct awareness campaigns about “Jiva Jantu Sanrakshan Abhiyaan” regularly.

Union Minister of State Shri Choubey also became aware of the maintenance of animals during the inspection of Bengal Safari. Under the adoption program, 70 people have adopted animals here. To motivate people to adopt more animals, Union Minister of State Ashwini Choubey adopted Tiger. He paid 2 lakhs for the maintenance of the adopted tiger through online.