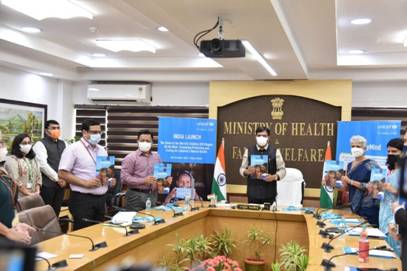 The report was launched globally today. Describing significance of the report which focuses on mental health, Shri Mandaviya said, “Mental Health is both an old issue and an emerging issue. While our traditional systems of medicine thoroughly emphasize on Holistic Health and complete well-being, Mental Health problems in developing countries like India have been on the rise.” Giving an example of his own joint family from rural-agricultural background, he explained that children and adolescents in these settings get a chance to interact with a wide number of other family members who they can open up to in times of emotional distress and seek guidance on matters which are at times avoided by parents. The culture of nuclear families has led to the increase in alienation and consequently rise in mental distress, he added.

The Union Health Minister highlighted that “COVID-19 was a test of mental stress for the entire society. He recounted his personal experience as the Pharmaceuticals Minister during the second surge of COVID19. “Production capacity of drugs had to be amplified and due official process to establish new plants had to be speeded up. Such work in the midst of a then unfolding human tragedy was very stressful.” Yoga, deep breathing and cycling helped him to overcome the stress, he added.

The Minister acknowledged that it is very vital to address mental health as an important aspect for creating a healthy society. He noted that teachers are very important stakeholders for addressing mental health issues along with parents and family. Family and teachers should have open consultation with children from a position of mutual trust and respect.

Speaking of the government’s commitment to addressing the issue on a wider scale, Shri Mandaviya reminisced about the Prime Minister’s ‘Pariksha pe Charcha’ with adolescents appearing for major examinations in their life: “Pradhan Mantri Ji has invested personal effort to relieve students of their exam stress. He also regularly advises school-going children to lead a morally rich life without worrying about the results and the future through platforms like ‘Mann ki Baat’. Such small steps make a very big impact on the children who might be tense because of examinations and other issues.”

Dr. Yasmin Ali Haque, UNICEF India Representative presented some key findings of the report. The State of the World’s Children 2021 has  found that around 14 percent of 15 to 24-year-olds in India, or 1 in 7, reported often feeling depressed or having little interest in doing things. “Children have not only been living an emotional tragedy, many are also at a higher risk of neglect and abuse,” she said.