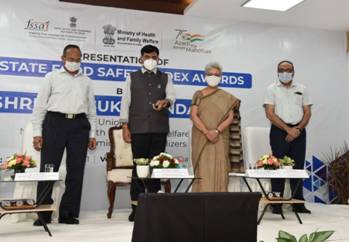 The Union Minister for Health and Family Welfare felicitated nine leading States/UTs based on the ranking for the year 2020-21 for their impressive performance. This year, among the larger states, Gujarat was the top ranking state, followed by Kerala and Tamil Nadu. Among the smaller states, Goa stood first followed by Meghalaya and Manipur. Among UTs, Jammu & Kashmir, Andaman & Nicobar Islands and New Delhi secured top ranks.

He also flagged off 19 Mobile Food Testing Vans (Food Safety on Wheels) to supplement the food safety ecosystem across the country taking the total number of such mobile testing vans to 109.

Speaking on the occasion, Shri Mandaviya observed that food is an essential component of health in a holistic sense. “Balanced nutrition is an integral part of Health,” he stated. He expressed hope that the mobile food testing laboratories will not only help functionaries in the States/UTs to enhance their outreach and conduct surveillance activities even in the far-flung areas, but will also be utilized as an effective tool for training and awareness generation activities amongst citizens.

He emphasized that the citizens are a stakeholder for food safety along with Government and Industry. Shri Mandaviya noted, “Pradhan Mantri Shri Narendra Modi Ji says that when one person takes a step forward, only a single step is achieved; however, when the whole country takes just one step forward, the country leaps by 130 Cr steps. People who bring attention to issues like food adulteration and low-quality standards automatically benefit other unconscious consumers who might be harmed.” He applauded the action taken by the organisation along with industry partners to take the country forward in Food Safety.

The Union Minister released the results of PAN-India survey for identifying the presence of industrially produced trans fatty acid content in the selected foods. Samples of various packaged food items under six pre-defined food categories were collected from 419 cities/districts across 34 States/UTs. Overall, only 84 samples, i.e. 1.34%, have more than 3% industrially-produced trans fats from the total of 6245 samples; India is on the right track of becoming industrial trans fats free in the 75th year of India’s independence.

Shri Mandaviya also launched various innovative initiatives by FSSAI including the Eat Right Research Awards and Grants to encourage and recognize high-quality research in the area of food safety and nutrition in India; a logo for Vegan Foods for easy identification and distinction from non-vegan foods for empowering consumers to make informed food choices. Further, the Minister also released various e-books that advocate and captures recipes around local seasonal food items, indigenous millets and plant-based sources of protein.

As part of the ongoing efforts to engage industry on the issue of plastic in food packaging, 24 food businesses signed a pledge on becoming “Plastic Waste Neutral” by collecting, processing and recycling of 100% post-consumer plastic waste from across the sources. 21 companies have committed themselves to reduce the levels of virgin plastic in the food and beverage sector.