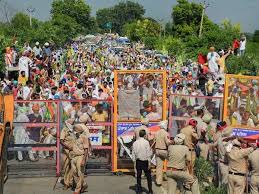 The talks were earlier scheduled for December 3.

Speaking on the matter, the Union Minister said it was decided that next round of talks will be held on December 3 but farmers are agitating, it’s winter and there’s COVID. So meeting should be held earlier.

On Monday, Union minister Amit Shah met Tomar – the second meet within 24 hours – after protesting farmers rejected the proposal of early talks that hinged on them shifting their protest venue.

For nearly three months, the farmers have been up in arms against the farm laws, aimed at bringing reforms by doing away with middlemen and improving farmers’ earnings by allowing them to sell produce anywhere in the country. Farmers and opposition parties allege that the laws will deprive the farmers of guaranteed minimum price for their produce and leave them at the mercy of corporates.

Fire Breaks Out Serum Institute Of India In Pune