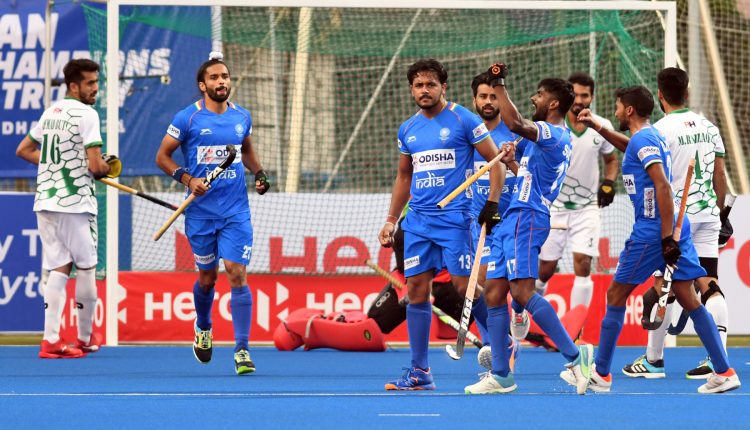 It was goals by Harmanpreet Singh (9′, 53′) and the experienced striker Akashdeep Singh (42′) that ensured India remain in contention for their third consecutive title at the Hero Asian Champions Trophy, having won the prestigious tournament in 2016 and joint winners in 2018. For Pakistan, Junaid Manzoor scored the lone goal in the 45th minute.

Earlier in the match, both teams lived up to the billing as they kept up the tempo from hooter to hooter. While it was India who drew the first blood through a penalty corner perfectly converted by Vice-Captain Harmanpreet Singh to gain 1-0 lead in the 9th minute of the match, Pakistan denied any big opportunity for India in the following minutes to keep the scoreline in check.

After a goalless second quarter, the match took a thrilling turn in the third and fourth quarter respectively with both teams upping the ante. Though India made some potential circle entries, they could not finish the task by converting the opportunities.

However, young Shilanand Lakra broke the gridlock in the 42nd minute when he made a fine tackle to enter the attacking circle from the left flank. He teamed up with Sumit to assist Akashdeep Singh who was poised in front of the goal-mouth to deflect the ball into the post, thus fetching India‘s second goal of the match.

Soon after, Pakistan scored in the 45th minute when they beat India‘s defence which had done well so far to restrict them to just three shots on goal. It was Junaid who successfully put the ball past India‘s goalie Krishan Pathak to narrow the deficit to 1-2.

The final quarter remained tense with both teams increasing the tempo in their attempt to score. It was Lalit Upadhyay who worked a good attack to earn India a PC in the 53rd minute.

To convert India‘s second PC of the match, Akashdeep ensured a perfect injection which was stopped on point by Sumit as Harmanpreet took a fierce drag-flick to score.

While India took their lead to a strong 3-1, Pakistan created two PCs in the final minutes of the match but the opportunity was denied by young India goalie Suraj Karkera who came up with brilliant footwork to made fine saves on both occasions.