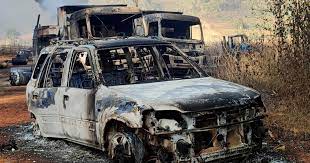 The Ambassadors in a statement called for accountability and “the immediate cessation of all violence”.

The Ambassadors reaffirmed their support for the people of Myanmar and the country’s democratic transition along with their strong commitment to the sovereignty, political independence, territorial integrity and unity of Myanmar.

Credible reports suggested that four children were killed, including two 17-year-old boys, a teenage girl and a child approximately age five, whose gender was not mentioned, the UNSC said in a statement.

The two humanitarians worked for the non-Governmental organization (NGO) Save the Children, which confirmed their deaths. They were killed while returning to NGO’s Loikaw office after responding to humanitarian needs in a nearby community, it added.

PM Modi To Lay Foundation Stone Of 23 Projects Worth Over Rs 17,500 Cr Today