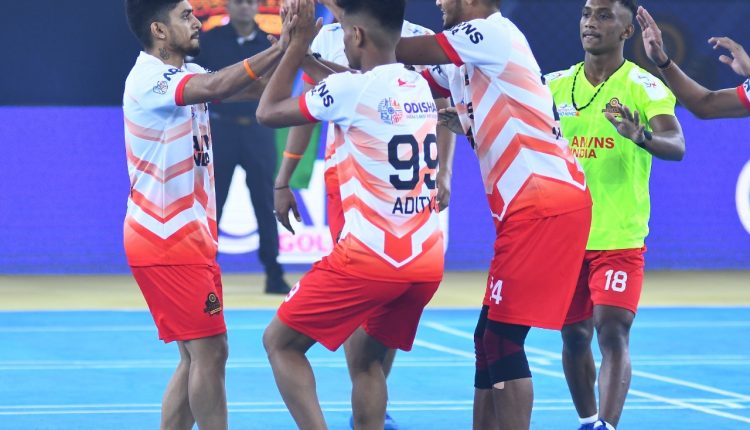 Santra scored 14 points in the attack by dismissing five Rajasthan Warriors defenders, all of them with brilliant dives. Nilesh Jadhav and Aditya Kudale supported Santra by scoring nine and eight points respectively.

Skipper Majahar Jamadar stood tall for Rajasthan Warriors by scoring an impressive 23 points with nine wickets but his heroics couldn’t save his side from suffering third successive defeat in the league. Besides Jamadar, Hrushikesh Murchavade also claimed 10 points in the attack.

In-form Jamadar provided the first three points for Rajasthan Warriors by dismissing Vishal with a brilliant sky dive in 39th second of the match before the opening batch was out in one minute and 47 seconds. Though Dipesh More showcased some skillful display in defence for Odisha Juggernauts by spending two minutes and eight second but Rajasthan Warriors ended the first turn at 20-2 in their favour.

Santra clinched eight points with three dismissals to put Odisha Juggernauts ahead with 34-20 score at the innings break.

Gowtham MK ensured four bonus points for Odisha Juggernauts in defence with his stay of three minutes six second at the start of second innings.

Starting the final turn at 38-44 behind, Odisha Juggernauts were quick to add six more points to their tally, thanks to Nilesh Jadhav’s two pole dive-dismissals.

Odisha Juggernauts did not let momentum slip away and completed a comfortable 65-46 win in the end.

Later tonight, Mumbai Khiladis will be looking to bounce back in the inaugural edition of India’s first-ever franchise-based Kho-Kho league when they lock horns with Chennai Quick Guns.

There will be no matches on Saturday. However, table-toppers Gujarat Giants will take on Odisha Juggernauts in the first match on Sunday whereas Rajasthan Warriors and Telugu Yoddhas will play the second encounter of the day.

Final is scheduled on September 4.