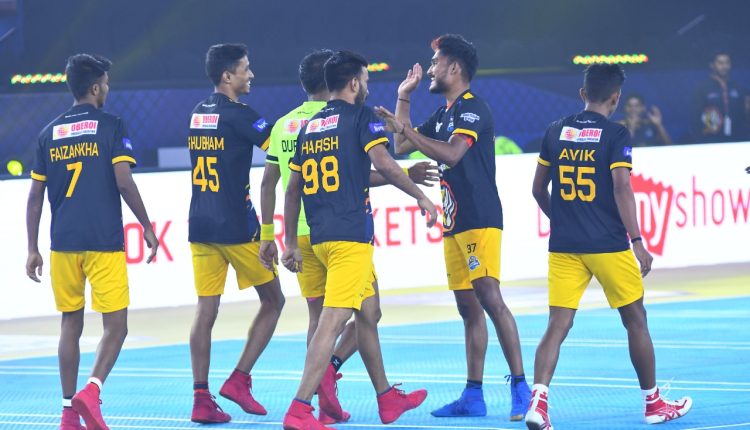 Pune: Mumbai Khiladis defeated Odisha Juggernauts by 79-31 to conclude their campaign with a win in the inaugural edition of Ultimate Kho Kho at the Shree Shiv Chhatrapati Sports Complex, Mahalunge, Pune, Maharashtra on Tuesday.

Gajanan Shengal scored 17 points while Shubham Kachhi and Sreejesh secured 11 points each as Mumbai Khiladis, who are already out of the playoffs contention, ended Odisha Juggernauts’ six-match winning run.

Odisha Juggernauts, with 21 points from nine games, are currently positioned on the top position in the points table. 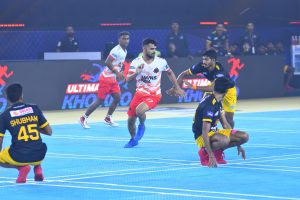 For Odisha Juggernauts, Dinesh Naik was impressive in the attack as he claimed 12 points by dismissing four players with dives. He was supported well by Monoj Ghotekar who scored eight points.

Mumbai Khiladis put up a good challenge to Table-toppers Odisha Juggernauts, who came into the match after sensational six back-to-back victories but the table-toppers managed to take a narrow lead of two points with 12-10 score.

Having already cemented Top-2 place on the points table, Odisha Juggernauts entered the match without some of their top performers including Vishal, Dilip Khandvi and Dipesh More.

Mumbai Khiladis began the second turn aggressively. With Gajanan Shengal dismissing 4 defenders, they added 31 points to their tally to end the first innings with a 43-12 lead.

They further continued the momentum in the second innings with a good defence technique to allow just 19 points to Odisha Juggernauts.

Attacking in the final turn with a 47-31 lead, Mumbai Khiladis kept things under control as they captured 13 opposition defenders to secure the win.

Playoffs will begin on September 2 with eliminator and qualifier 1 while the qualifier 2 will take place next day. Final will be played on September 4.

On the final day of the league stage on Wednesday, Odisha Juggernauts will lock horns with Telugu Yoddhas while Gujarat Giants play Rajasthan Warriors in the first match of the day.