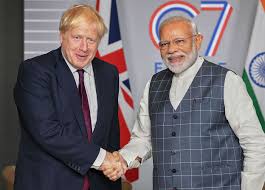 The high-level meeting to be presided over by Britain in the coastal region of Cornwall will be held between June 11 and 13.

UK Prime Minister Boris Johnson, who had cancelled his India visit for this year’s Republic Day event because of the detection of the mutant strain of the virus in Britain, is likely to visit the country “ahead of the G7”, a press statement read.

Apart from India, Australia and South Korea have also been invited to the summit.

Last year, British Prime Minister had extended an invitation to Modi during a phone call when India was chosen alongside South Korea and Australia as guest countries of the multilateral summit. A formal invite for the same was made on Sunday.