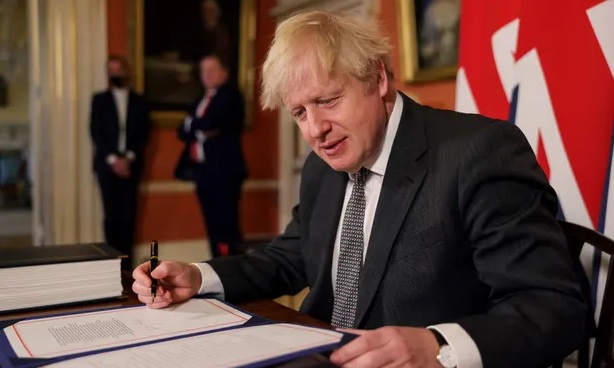 London: The United Kingdom’s Parliament has voted in favour of the post-Brexit trade deal thrashed out between the country and the European Union.

Boris Johnson’s post-Brexit trade deal with Brussels has passed into law following a whirlwind 14-hour parliamentary process that has radically redrawn the UK’s ties with Europe.

The prime minister thanked MPs and peers for passing the European Union (future relationship) bill in one day, in a statement urging the nation to “seize” the moment when the transition period with the bloc ends at 11 pm on Thursday.

It was announced that the Queen had given approval to the European Union (future relationship) bill at 12.25 am on Thursday morning. Her signature puts the UK-EU agreement into British law, preventing a no-deal Brexit at 11 pm on Thursday when the transition period ends.

The House of Lords gave the bill an unopposed third reading late on Wednesday, hours after MPs had voted it through by 521 votes to 73 – a majority of 448.

It followed the recall of parliament for an emergency one-day session to approve the EU-UK trade and cooperation agreement, concluded by the prime minister and the European commission president, Ursula von der Leyen, on Christmas Eve.

The deal comes four and a half years after the Brexit referendum vote to take the UK out of the European Union, but its rapid approval has raised concerns from MPs and peers that the bill has not been properly scrutinised.