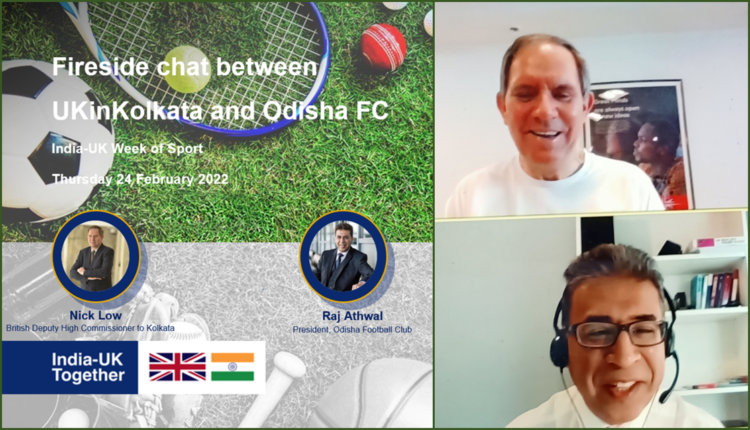 This online conversation is part of the ‘India-UK Week of Sport’ kicked off by the UK Government to celebrate the incredible living bridge between both nations in India’s 75th year of Independence. From 21-27 February, a series of on- and off-the-field interactions will highlight the shared love of sport and the opportunities it can create for people across both nations.

British Deputy High Commissioner to Kolkata, Mr. Nick Low said: “I was delighted to have the opportunity to chat with Raj Athwal, the President of Odisha Football Club.  It’s tremendously exciting to have a British Indian at the top of an Indian Super League club.  And even more someone like Raj, who’s a football man through and through and who exudes love and passion for “the beautiful game”.  I’m sure supporters of Coventry City, Rangers and Watford, where Raj has previously worked, will join me in wishing him every success in Bhubaneswar.”

President, Odisha Football Club, Mr. Raj Athwal said: “I was delighted to speak to Mr. Nick Low as part of the India-UK Week of Sport. Last year, we announced a landmark three-year partnership with Watford FC. I believe this partnership will mutually benefit both the clubs across the two countries and help provide international exposure and training to its players, particularly to women footballers. We have the opportunity now in India to grow women’s football, especially in Asia. We are committed to it.”

During the online conversation, Mr. Low and Mr. Athwal discussed about the passion for sports which exists in Odisha and its world-class sports infrastructure.

The ‘India-UK Week of Sport’ will showcase the best of sport with events involving Indian and British personalities reflecting on their own journeys. It will include Olympic and Commonwealth Games gold medallist Neeraj Chopra, cricketer Dinesh Karthik, para-badminton World Champion Manasi Joshi, tennis legend Vijay Amritraj and India rugby captain Vahbiz Bharucha among others.

This week’s activity leads up to ‘India-UK Together 2022’ initiative. The joint initiative, led by the British Council and the Indian Council for Cultural relations, will launch later this year. It will celebrate the unique connections that can help shape the future of both nations through a diverse programme of activities – highlighting the strong cultural links between Britons and Indians – across sport, education, the arts, and much more.

The India-UK Week of Sport is being celebrated from 21-27 February with both on- and off-the-field activities across themes highlighting diversity in sports, including cricket, hockey, football, track and field, racquet sports and rugby. Follow the celebration online on @UKinIndia. Join the conversation and share your favourite India-UK sporting memories on Twitter with #IndiaUKTogether.

The Birmingham 2022 Commonwealth Games will take place from 28 July to 8 August 2022 and will be the first major multi-sport event to award more medals to women than men.

Prime Ministers Narendra Modi and Boris Johnson have made an historic commitment to strengthen work between the UK and India over the next decade with the 2030 Roadmap for future relations.

The UK and India benefit from a unique ‘Living Bridge’ of people, ideas, institutions, arts and culture – that sits separate to the government-to-government relationship. The UK is home to a vibrant Indian diaspora of more than 1.6 million and has its largest overseas diplomatic network anywhere in the world right here in India.

Proliferation Of Digital Payments In Booking Of Tickets Through ATVMs