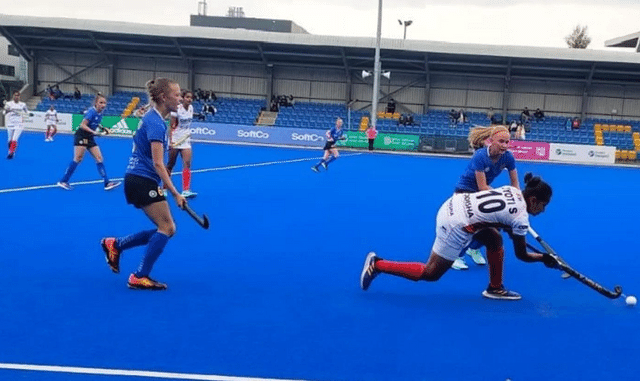 Dublin: Indian Junior Women’s Hockey Team on Wednesday, 22 June 2022, continued their unbeaten run in the Uniphar U235 Nations Tournament as they recorded a comprehensive 3-0 win over Ukraine, here, in Dublin, Ireland. Nikita Toppo (33), Manju Chorsiya (44’) and Beauty Dungdung (55’) scored one goal each as India passed the Ukraine test with flying colours.

Ukraine’s U-23 Women’s Hockey Team got out to a fast start, looking to attack early and winning their first Penalty Corner (PC) inside five minutes. The Indian team, on the other hand, stood tall to deny them an early goal advantage. As the game progressed, India gradually grabbed control, earning back-to-back PCs. However, they missed out on an opportunity to break the tie as the first quarter ended without any goal from either team.

India began the second quarter considerably more confidently than they did the first, which paid off as they won a PC in less than 10 minutes, however we’re not able to take advantage.  Following that, both teams battled for midfield dominance but were unable to create any clear-cut opportunities, leaving the game tied at 0-0 at the end of the second quarter.

Like the second quarter, India opened the third quarter on the offensive and were rewarded when Nikita Toppo scored the game’s first goal in the 33rd minute. India had an opportunity to double their lead through a PC, moments after grabbing the lead, but they missed it. Ukraine also received a penalty corner but failed to convert. Despite taking the lead, India pressed on and it paid off when Manju Chorsiya doubled India’s lead in the final minutes of the third quarter.

As the fourth quarter began, Ukraine sought to counter-attack in pursuit of their first goal, but the Indian defence stayed tall to deny them any opportunity while maintaining their attack. In the 54th minute, India earned the first PC of the fourth quarter, and a minute later, Vice Captain Beauty Dungdung hammered another goal, taking the game away from Ukraine.

The Indian Junior Women’s Hockey Team will square off against the United States of America (USA) in their fourth and final league stage match of the tournament on Thursday, 23 June 2022, at 1930IST.