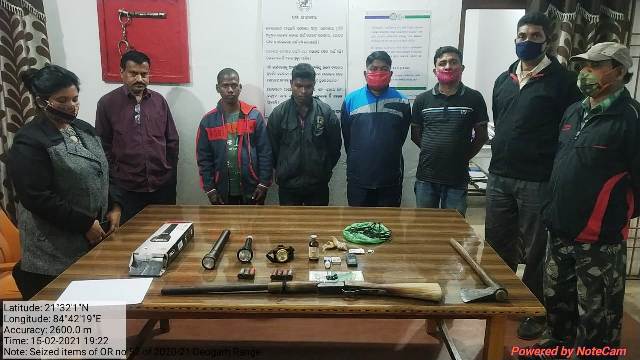 Deogarh: Forest personnel of Deogarh on Friday arrested two poachers who were trying to kill wild animals from the Pradhanpat reserve forest in the district.

The officials who encountered the poachers during patrolling also seized country-made rifles, several rounds of bullets and a hack from their possession.

Reports said Forester Prasanna Sahu under the direction of DFO swung into action and nabbed the poachers from the reserved forest. The arrested poachers are Dharmu Munda(26) and Angad Dehury(25) of  Munda Sahu and Raja Munda respectively.

Official sources said that the poachers admitted that they have been killing wild animals for long and were loitering in the reserve forest for the sole purpose of killing animals.

The accused have been forwarded to court, sources added.

PragativadiNews 3 28 mins ago
Mobile and Phones