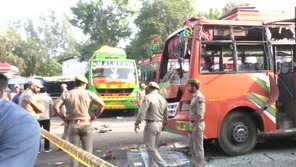 Jammu: At least two civilians were injured in an explosion on a parked bus in Jammu’s Udhampur district on Wednesday night.

Preliminary reports suggest that an explosion took place when two buses were parked near a petrol pump in Udhampur’s Domail Chowk around 10.30 p.m. The blast was captured by the nearby CCTV.

The explosion damaged the window panes of one bus, which was empty when the explosion took place. However, two civilians sleeping in a nearby bus were injured. Officials said the injured were shifted to a hospital.

“First blast happened last night around 10.30 pm in a bus that was parked near a petrol pump. Similarly, another blast happened on a bus at Udhampur bus stand. No injury in 2nd blast. 2 got injured in the 1st blast & are out of danger. Probe on,” DIG Udhampur-Reasi Range.