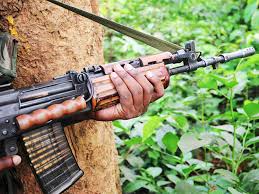 Bhopal: Two Maoists, including a woman cadre, were killed today in an encounter with security forces in Madhya Pradesh’s Mandla district, the police said.

Two Maoists, carrying a cash reward of ₹10 lakh and 14 lakh on their heads, were gunned down in an exchange of fire with security forces in Madhya Pradesh’s Mandla district late on Friday, said a police officer.

The slain militants have been identified as Pramila (25), and Mainu Uike (21).

According to sources, the Maoists of platoon 3 of Vistar Dalam were holding a meeting on Friday night when police got information regarding their presence in Lalpur village of Sal forest of Mandla.

The police carried out a search operation and found at least two dozen Maoists. When asked to surrender, the Ultras started firing. In retaliation, police gunned two Maoists, carrying a cash reward of Rs 10 lakh and 14 lakh on their heads respectively.

This was the fifth gun battle between the police and Maoists in Balaghat division over the past six months.