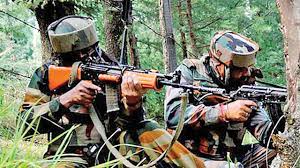 Srinagar: Two Lashkar-e-Taiba (LeT) terrorists were killed in an encounter with security forces in the Kulgam district of Jammu and Kashmir on Tuesday.

Acting on a specific input of the presence of terrorists in the area, the security forces had laid a cordon and search operation in Okay village of Kulgam district. During the operation, the militants opened fire.

IGP Vijay Kumar said that the terrorists were repeatedly asked to surrender, however, they refused to do so and opened fire upon forces, which was retaliated, resulting in the killing of two terrorists.