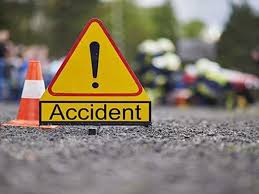 Angul: Two persons were killed while another suffered injuries in two separate road accidents in Angul this morning.

The deceased has been identified as Basant Barik hails from Kandasar village.

Reportedly, the incident took place when the deceased was riding on was hit by a bus from behind near Nalco police station today.

In a separate incident, a person died while another was injured after their motorcycle fell off a bridge at Raibahal under Kishorenagar police limits in the district. The injured have been sent to the hospital for treatment.