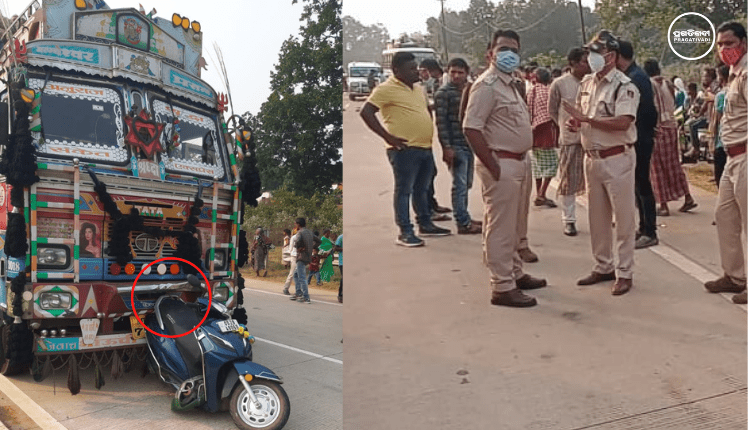 Two Killed After Being Hit By Speeding Truck In Deogarh

Deogarh: Two persons were killed after a speeding truck hit the scooter they were travelling in on National Highway-49 near Nuabhuin village under Deogarh police station limits.

The deceased have been identified as Nakul Ranachul and Bikram Pradhan of Palakuda village in the Tileibani block.

According to sources, the duo was en route to Good News India Sevashram at  Nuabhuin village to meet their granddaughter on the occasion of Christmas. However, fate had other plans for them.

The accident took place at around 2.30 pm while Nakul Ranachul and Bikram Pradhan were travelling in a scooter when a speeding truck rammed into them from the rear. The collision was so intense that the duo died on the spot, sources added.

Following the tragic accident, local staged a road blockade demanding strict actions against the driver and compensation from the family of the deceased persons.

Later, SDPO Pratyush Kumar Mohapatra along with Deogarh Police have reached the spot and pacified the locals with assurances.

Reportedly, the police have recovered the bodies from post-mortem and seized the ill-fated vehicles damaged in the crash.