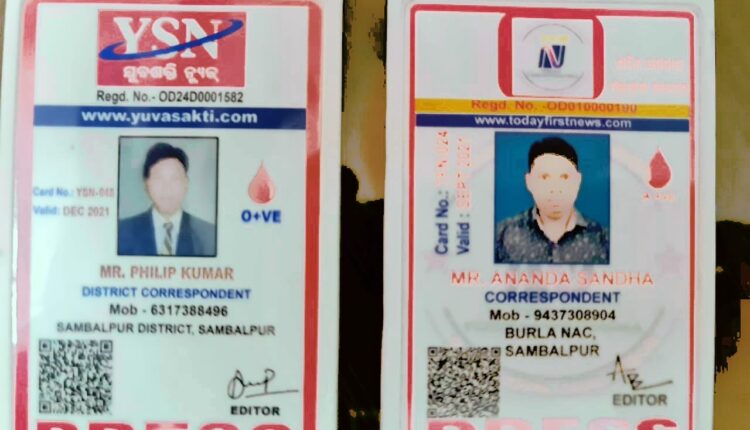 Sambalpur: Burla police on Tuesday arrested two fake journalists on the charges of extorting money from a person, who was allegedly involved in a case registered at the police station in Sambalpur district recently.

The accused duo was identified as Ananda Sandha of Today First News and Philip Kumar of Yuvashakti News (YNS).

According to police, the complainant Birendra Bagarti was served with Notice U/s 41(A) Cr PC for being involved in Burla police station case No 616/2020.

While leaving the police station along with his mother, he was restrained by the accused persons near a petrol pump in front of the police station, who disclosed d their identity as media persons having a good link with some senior police officers/judiciary and asked the complainant to arrange Rs 50,000 for expenses in this head.

As the expressed his inability to pay the amount both the accused persons threatened him to implicate him in a rape case by asking the complainant/victim of the case in which he was released after being serviced with Notice u/s 41(A) Cr PC, read a police statement.

During the investigation, two identity cards marked as ‘Today First News’ in the name of accused Ananda Sandha and YSN ‘Yuba Shakti News’ In the name of Philip Kumar have been seized. Both the accused persons have been arrested on Tuesday at 10.30 PM.

Three Wetlands From Odisha Added To List Of Ramsar Sites

DGCA Issues Guidelines To All Airports To Prevent…