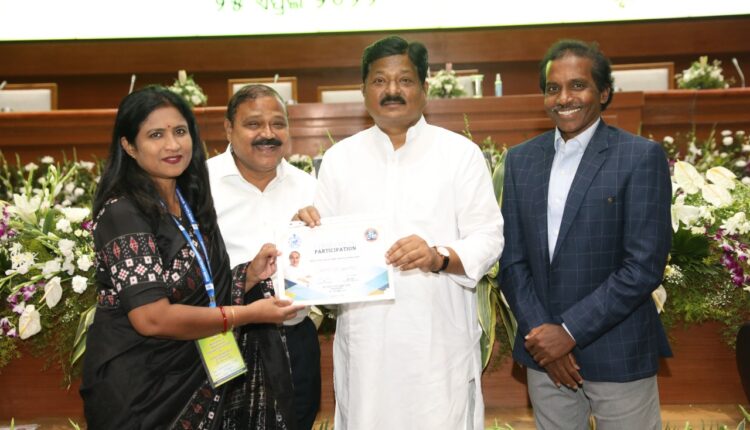 Bhubaneswar: The two-day orientation workshop for newly-elected Mayors and Chairpersons of Urban Local Bodies (ULBs) concluded at Lok Seva Bhavan today with all the participants receiving certificates from the Minister of Housing and Urban Development (H&UD), Pratap Jena. He had interactions with the Mayors and Chairpersons on various urban initiatives at length.

The Workshop was inaugurated on 25th April by Chief Minister Naveen Patnaik who advised the newly-elected Mayors and Chairpersons of the ULBs to provide better services to the people by adhering to the 5T governance principle at every level. Addressing the newly elected representatives, the Odisha CM spoke about the wide-ranging urban development programmes being implemented by the Government. He expressed hope that the new leadership would take the development of the cities and provision of services to new heights.

A Directory of members of Mission Shakti SHGs and Slum Dwellers’ Associations (SDAs) elected in the urban elections in 2022 was released by the Hon’ble CM on the first day of the Workshop.

This is for the first time that an induction workshop is being organised for the elected representatives of all the 114 ULBs in Odisha where the participants were oriented on their roles and responsibilities and on the flagship programmes.

Principal Secretary H&UD, G Mathi Vathanan said that such workshops will be organised by the Department for all the newly elected councillors and corporators at the regional level. We are happy to note that the Workshop was very well received by the participants and they were keen to know more about the urban schemes and programmes, he added.  Among other DM Sangramjit Nayak, all seniors officers of H&UD Departments, Head of Civic partispations, Janagrah, a State level partner of H&UD Department were also present. In a historic decision, Government of Odisha has decided to hold annual convention of Mayors and Chairpersons going forward.