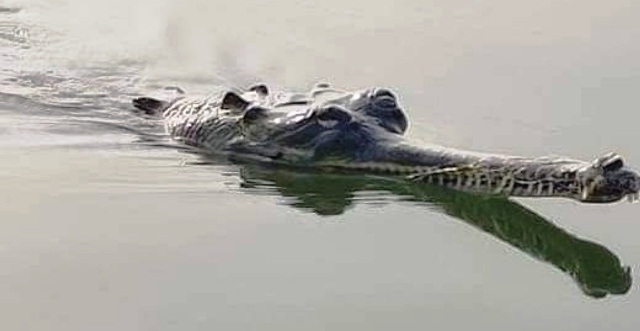 Champeswar: Panic gripped riverside villagers after two crocodiles were spotted swimming in the Mahanadi River close to Dimiria Ghat in Narasinghpur of Cuttack district on Sunday.

According to information, some villagers first saw the reptiles while they were taking bath in the river. The spotting of crocodiles sent a sensation in the locality and scores of people gathered on the river embankment to see the reptiles.

As most people of villages, located on both the sides of the river, take bath in the river water every day, the forest department has urged all not to go the river till.

The forest department personnel are keeping a close eye on the movement of the crocodiles, informed Western Forest Division Officer Ashok Behera.

It may be mentioned here that the Nadankanan Zoo authorities on 3rd December 2021m had released four fully-grown adult Gharials into the Satkoshia gorge.