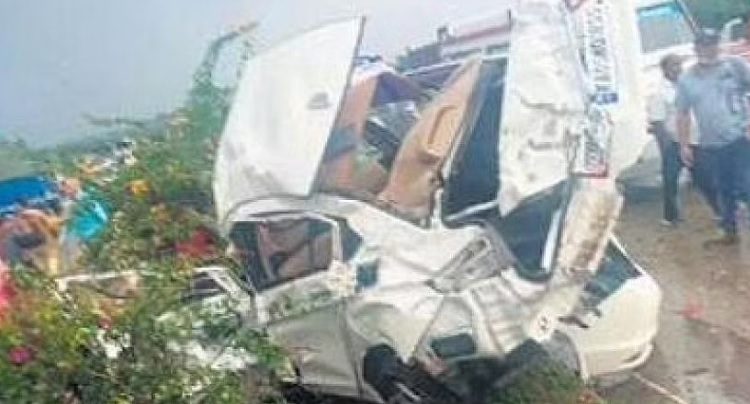 Bengaluru: Two students died on the spot after their Honda City jumped the divider and collided head-on with a mini bus coming from the opposite direction.

The incident was reported at about 5:15 p.m yesterday near Kengeri on the NICE road.

The deceased have been identified as Sumukh (22) and Leena G Naidu (18). Both the victims were residents of R R Nagar and college students.

While Leena was a first-year BBA student in R V College, Mysuru Road, Sumukh was pursuing diploma at M S Ramaiah College. They were headed towards the Sompura gate from PES College side.

According to reports, Sumukh is said to have lost control and crossed the divider and collided head on with a bus coming from the opposite direction.

The impact was so severe that both the car and the bus toppled after the collision. One of the car tyres, which got separated, hit a Toyota Fortuner from behind.

The Fortuner was also damaged in the accident. The bus driver sustained serious injuries and one of his legs is completely crushed. A few other bus passengers have also sustained minor injuries, police said.

Fire Breaks Out At School In Keonjhar