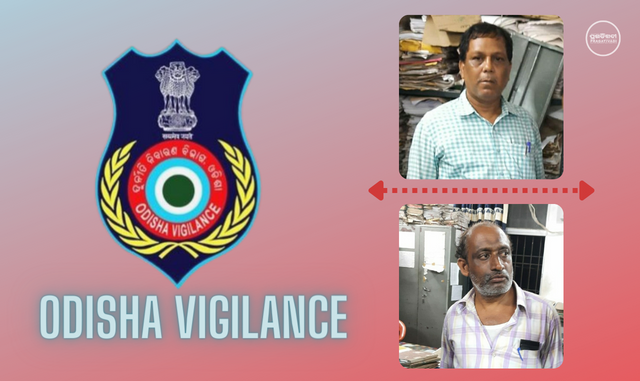 Berhampur: Two clerks working in the office of the District Education Officer (DEO) Berhampur were caught by the Odisha Vigilance for taking a bribe of Rs 10,000 from a retired peon to prepare his pension documents.

According to reports, the two accused clerks— Sushil Kumar Patnaik and Pradeep Kumar Mohanty— had demanded a bribe of Rs 10,000 from Kalucharan Panigrahi, a retired peon of Padhal Jaipur School in Aska Block, for preparing the latter’s pension-related papers.

Of the Rs 10,000, Sushil Kumar Patnaik had demanded Rs 7000 and Pradeep Kumar Mohanty Rs 3000 and the respective amounts were seized from them this evening by the Vigilance sleuths.

According to reports, Kalucharan Panigrahi of Hinjilicut Mohan Colony retired on May 31, 2022. He had sought the help of Sushil Kumar Patnaik and Pradeep Kumar Mohanty, two junior clerks of the DEO office, to do his pension-related paperwork. When the two clerks asked Kalucharan for a bribe of Rs 10,000, the former informed the Vigilance department.

In the meanwhile, the vigilance team raided the office and recovered money the tainted money from both the clerks while seizing various documents from them.

Both the accused have been arrested in the case (17/22). Vigilance sources said that searches are underway at various places including the residence of the accused clerk in the DA angle.