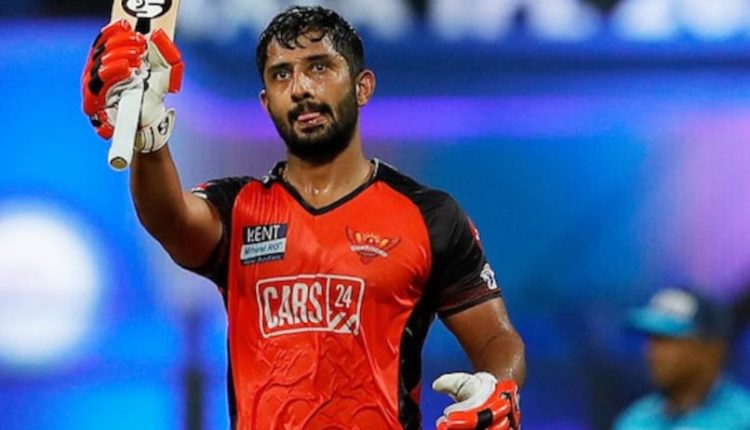 Rahul Tripathi, who has been in splendid form for SunRisers Hyderabad in the ongoing Indian Premier League (IPL) season has not been given a chance in the 18-member T20I squad. The right-handed Tripathi has struck the ball superbly for SRH and he has scored 393 runs in 13 matches so far at a strike rate of 161.73, including three half-centuries. Fans were expecting the batter to be named in T20I squad but this was not to be the case.

As soon as the squad was announced on Sunday, fans immediately took to Twitter to express their displeasure over Tripathi not being given a chance in the squad.

Disappointed to not see Rahul Tripathi’s name in the squad. He deserved a chance.

Retweet if you think Sanju Samson and Rahul tripathi deserve to be in team india #EngvsInd #IndvsSA pic.twitter.com/HymRxfDBQD

Don't know why Rahul Tripathi is not selected?.!Nothing but it's India's loss.!One of the best uncapped batsman in this season.!

Imagine not selecting Tripathi even though having 2 Wicket keepers already In T20I squad.. pic.twitter.com/I9WaziRGo6

Like this reply ❤️
If you are missing Rahul Tripathi in this T20 Squad. pic.twitter.com/9FtAU3JEw9

Feel for Rahul Tripathi and Sanju Samson, both deserve to be part of the T20 setup. Two of them have been showing very good consistency with healthy strike rate in IPL in the last few years – hoping both will be part of the Ireland T20 series.

The senior pros — Virat Kohli, Rohit Sharma and Jasprit Bumrah have all been rested for the T20Is. KL Rahul will be leading the side while pace sensation Umran Malik has earned a maiden call-up. The five-match T20I series will begin on June 9 in Arun Jaitley Stadium in Delhi.