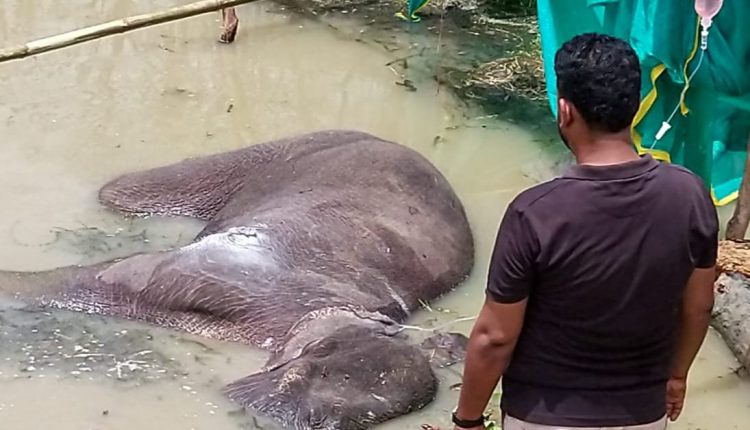 Sambalpur: Sambalpur Divisional Forest Officer on Thursday revealed that the ailing elephant which was stuck in a pond near Sapalahara village died recently, had received a bullet.

In a press meeting here, DFO Vishwanath Neelannavar said “Doctors have recovered a bullet from the body of the elephant during the post-mortem.”

The accused are reported to have fired at the elephant from atop a tree in Kalapat area, DFO said.

Meanwhile, three persons have been detained for interrogation in this connection and a country-made gun has also been recovered from the accused.

It is pertinent to be mentioned that the sick elephant who remained stuck in a pond at Saplahara in Badasahi Forest Range under Sambalpur Forest Division died on Tuesday.

The tusker died soon after it was rescued by the forest department officials.

The elephant which had gone into the water body on Thursday night reportedly got stuck and was being provided treatment inside the pond for the last three days.

Villagers in the area say the elephant was stranded when it came to drinking water on June 16 night. It got trapped in the mud and is unable to get out despite several efforts.