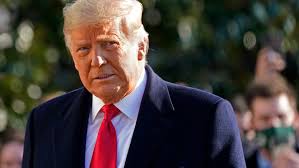 Washington: The US Senate was expected to deliver a verdict in Donald Trump’s impeachment trial this weekend after his lawyers argued on Friday that the former president bears no responsibility for an attack by supporters on Congress after he failed to win re-election.

The Trump legal team characterized the impeachment case as a politically motivated “witch hunt” — an outgrowth, they said, of years of efforts to drive him from office — and they sought to reduce the case to Trump’s use of a single word, “fight,” in a speech preceding the Jan. 6 riot. They played dozens of clips showing Democrats, some of them senators now serving as jurors, using the same word to energize supporters in speeches railing against Trump.

“You didn’t do anything wrong” in using the word, Trump attorney David Schoen told the senators. “But, please, stop the hypocrisy.”

Trump’s lawyers presented his defence, relying on the argument that the former president’s rally remarks are protected by free speech principles.

House managers had offered two days of powerful and, at times, emotional arguments including graphic video of the January 6 attack by Trump supporters on the US Capitol.

President Joe Biden said he was “anxious to see” whether Republican senators will vote to convict as the trial appears headed to a speedy conclusion.