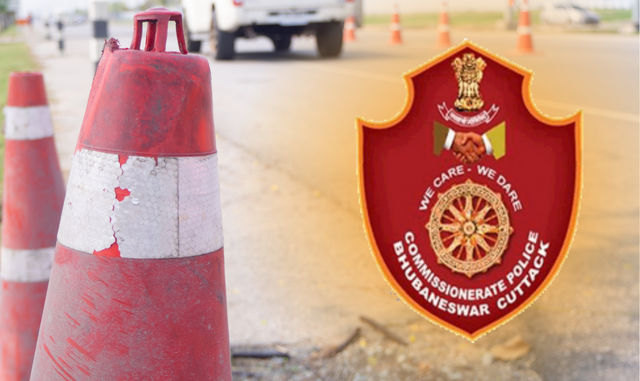 Bhubaneswar:  In order to facilitate the construction works for Road Over Bridge (ROB) at Rasulgarh on NH-16 to accommodate 3rd Railway Line between Bhubaneswar – Mancheswar, the Commissionerate Police will be imposing traffic diversion at the point from 25th November onwards.

In a public notice, the Commissionerate Police said that Addl. General Manager (Project), Rail Vikas Nigam Limited (RVNL), Bhubaneswar had requested Diversion of Traffic during the construction of the ROB at Rasulgarh with a subsequent traffic diversion plan submitted for the free flow of traffic on NH-16 and the safety of commuters.

“By virtue of powers conferred u/s 28 of Odisha Urban Police Act, 2003 (Odisha Act 8 of 2007) and in pursuance to Regulation 36 of Bhubaneswar — Cuttack, Police Commissionerate (Traffic and Public Order) Regulations 2008, it is hereby notified that during the construction work of ROB on NH-16 and subsequent traffic diversion plan submitted by Addl. General Manager (Project), Rail Vikas Nigam Limited (RVNL), Bhubaneswar for diversion of traffic shall be implemented,” reads the notice.

Following is the traffic diversion route notified by the Commissionerate Police:-

·         The vehicles coming from Vani Vihar side intending to go towards Cuttack/Puri side shall not allow to ply on the Rasulgarh Flyover bridge on NH-16.

·         They shall avail the newly constructed Road Over Bridge at VSS Nagar Chhak and proceed up to Palasuni Chhak by the service road through Rasulgarh Square.

·         Prior announcement through the public address system followed by wide publication in print and electronic media sensitizing public about the proposed diversion should be done by the construction agency.

KDM aims for Make in India, Make for the World