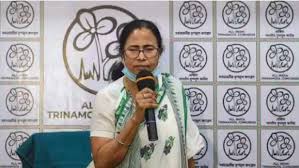 Kolkata: West Bengal CM and TMC supremo Mamata Banerjee on Friday announced the candidates’ list of the party for 291 out of the total of 294 constituencies.

The Gorkha Janmukti Morcha (GJM) will contest the remaining three seats in Darjeeling. The GJM is the ally of TMC. Releasing the candidates’ list, Banerjee said that 23-24 existing TMC MLA were dropped from contesting polls due to age and other factors.

She said of 291 candidates, 50 are women and 42 belong to Muslim community. In three seats, Darjeeling, Kalimpong and Kurseong, the Gorkha Janmukti Morcha (GJM) will contest the elections and whoever wins will support TMC, the West Bengal CM said.

The TMC supremo said her party has given Assembly poll tickets to eminent personalities from the field of arts, sports, media and culture.

The WB Chief Minister said Sobhandeb Chattopadhyay will be contesting from the Bhowanipore constituency.