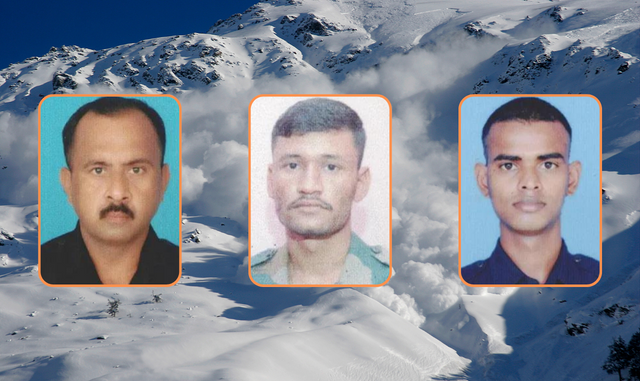 New Delhi: Three soldiers were killed after an avalanche hit an army patrol in north Kashmir’s Machil area in Kupwara district on Friday, the Indian Army said on Saturday.

According to a report by news agency AP, a slide of snow hit the north-western Machil sector in Kashmir and trapped three soldiers on a patrol, said Col. Emron Musavi, an Indian army spokesperson. He said that the three were rescued and rushed to a hospital where they succumbed.

The deceased have been identified as Mukesh Kumar, Gaikwad Lakshma Rao and Souvik Hazra. They belonged to Army’s 56 Rashtriya Rifles.

“Two soldiers stuck in the snow were rescued and evacuated to the Military Hospital, Kupwara. Another soldier, who was part of the patrol, developed hypothermia and was also evacuated. Later, all the three bravehearts could not survive,” the Army said.

Notably, the avalanche hit the snow-bound Machil sector just a day ahead of a fresh spell of snowfall in the higher reaches, as predicted by the meteorological department.