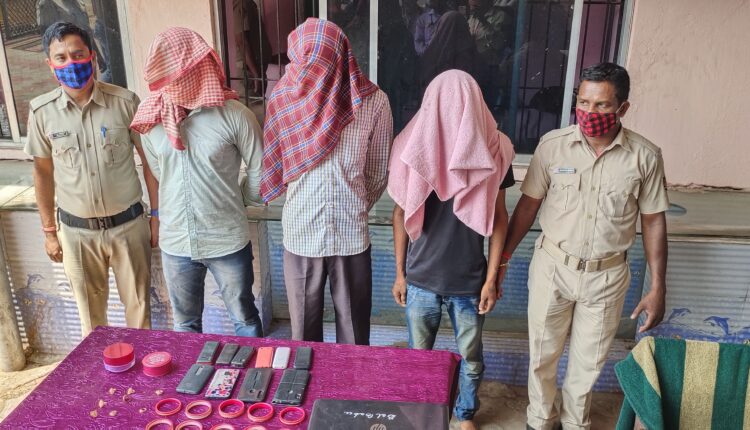 Jagatpur: Police managed to arrest three members of a looters’ gang on charges of robbing valuables from a house in Jagatpur two months ago. However, other accused are still at large.

At a press conference in Jagatpur police station today, Cuttack Zone-1 ACP Amarendra Panda and Jagatpur PS IIC Rabindra Nath Meher informed that the members of the looters’ gang were caught on the basis of CCTV footages

According to reports, the gang broke into the house of Ramesh Samal of Singhamapur village in Jagatpur police station late on the night of February 15 and looted gold jewelery and some cash from him. The miscreants used a white Bolero SUV and a black Pulsar bike, to flee the scene.

Following a written complaint by the victim Mr. Samal at Paga police outpost, Jagatpur police took up the investigation.

During the investigation, driver of the SUV, Rakesh Kumar Das (28), hailing from Sishuasapanpur village under Salepur police station limits, who was involved in the theft, was arrested. Police also arrested Jayant Kumar Raut (32), of Paikrabati area. Among the two other accused identified in the robbery were Madh Bhoi (32), of Sishua village in Salepur police station, and Kahna alias Kahnu Behera of Nemal area. Police suspect the involvement of several persons in the loot incident.

As per reports, five gold bangles, eight gold rings, four sets of water pumps, one inverter, 10 expensive mobile phones, and a laptop were seized from the arrested accused persons.

The gang was found to be involved in several loot incidents across the state. A case (63/21) has been registered against them under Sections 457, 380 of the IPC, and the accused were forwarded to the court.