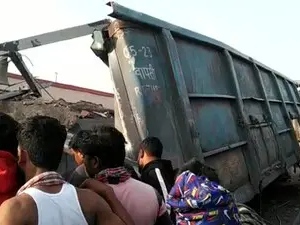 Jajpur: Three persons were killed and several others injured after a goods train crashed into the waiting hall at Jajpur’s Korai station in Bhadrak-Kapilas Road Railway Section under Khurda Road Railway Division of East Coast Railway in the wee hours of Monday.

The train was on its way from Bhadrak to Cuttack when around three to four coaches of the train derailed and rammed into the waiting hall. Railway Station building was also damaged due to the derailment.

Both the lines on the site have been blocked. Accident Relief Train and Accident Relief Medical Team are ordered to reach the site immediately. DRM Khurda Road along with other Branch officers have rushed to the accident spot.