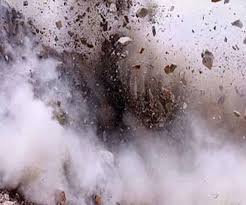 Malkangiri: Three District Reserve Guard (DRG) jawans have lost their lives and 14 others injured in an IED blast triggered by Naxals in Narayanpur district of Chhattisgarh.

According to reports, more than 25 DRG jawans were returning to their base after an operation when the landmine went off in Kodenar forest on the Chhattisgarh-Odisha border.

The IED blast was so intense that the bus was thrown into the air for 30 feet and landed with a huge crash. While three jawans were killed in the blast triggered by Maoists, several others were left injured.

Sources said among the injured jawans, the condition of two is stated to be critical. However, the identities of the martyred jawans were not known immediately.

Reportedly, combing operation in the area has been intensified.