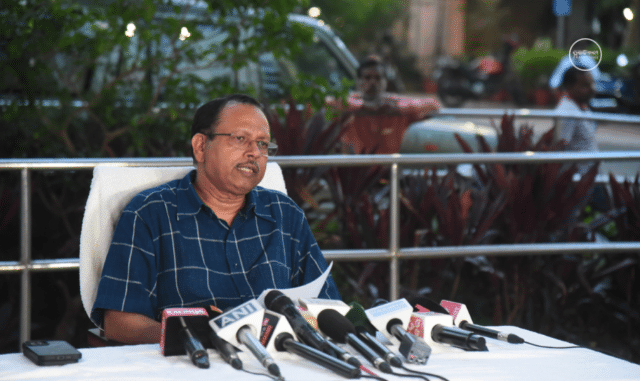 Though No Cyclone Threat To Odisha, Govt Still In Readiness: SRC

Bhubaneswar: Even though the IMD predicts that the impending cyclone is unlikely to make landfall in Odisha, the State government is still in readiness to tackle any possible situation, said Special Relief Commissioner Pradeep Jena on Saturday.

Addressing a presser this evening, the Odisha SRC has warned the fishermen not to go into the deep sea to catch fish from Sunday onwards and advised those already out in the sea to return to the coast by tomorrow (8th May).

“The Principal Secretary of the Department of Fisheries & Animal Resources Development (F&ARD) has been asked to report on the number of fishermen who have gone to sea and how many of them have returned by the morning of 8th May,” the SRC said.

In view of the impending cyclone in the Bay of Bengal, the department has been asked to set up a 24-hour control room to coordinate between the district level office and the Office of the Special Relief Commissioner. It also has been instructed to issue regular warnings to fishermen at the district level. Besides, traditional fishermen have also been warned to keep their boats in a safe place as there is a risk of high tides.

The Indian Navy and the India Coast Guard have been instructed to ensure the safe return of all fishermen from the sea before 8th May and impose restrictions on the movement of ships and fishing boats in the sea. Besides, they have been also instructed to stay prepared with human resources and the necessary equipment to deal with the possible cyclone.

At the district level, Collectors/DMs will regularly alert farmers about the possible cyclone, so that farmers can protect all vegetables/horticulture, paddy and harvested paddy and paddy stocks stored in the mandis.

The Agriculture Department’s field staff have been asked to take all necessary steps to raise awareness among farmers and implementation of all necessary guidelines.

A list of people with disabilities, children in orphanages and elderly people living in old age homes will be prepared by the department and if any such situation arises and they would be safely relocated to cyclone shelters where necessary and food and drinking water will be arranged.

The 18 districts for which an alert has been issued are Ganjam, Gajapati, Puri, Khordha, Jagatsinghpur, Kendrapada, Jajpur, Bhadrak, Balasore, Nayagarh, Cuttack, Mayurbhanj, Keonjhar, Dhenkanal, Malkangiri, Koraput, Rayagada and Kandhamal. All photos and information related to the damage to the farms, including the geotagging, should be documented in the case record, and photographic evidence of the damaged houses of the beneficiaries to be assisted is mandatory.