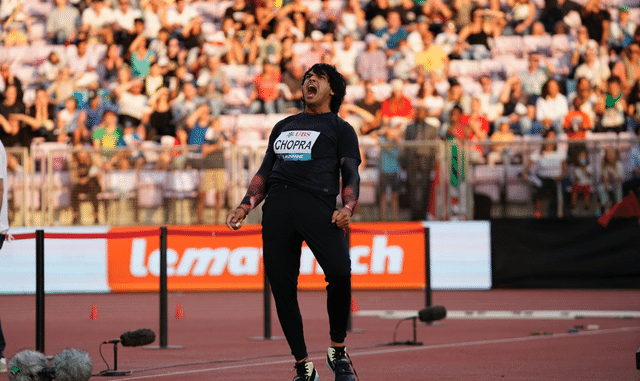 “This win is very important for our country,” says Neeraj Chopra after scripting history in Lausanne Diamond League 2022

The 24-year-old javelin thrower, who pulled out of the Birmingham 2022 Commonwealth Games due to a groin injury he had picked up while winning silver at the World Championships in the USA last month, made a stunning comeback with an 89.08m throw in his first attempt to clinch the title in style. He registered three valid throws (85.18 in second and 80.04 in sixth) after passing his third and fifth attempts in the event.

“It was a special night, felt really good to win and most importantly made a comeback with a very good throw. Abhinav Bindra sir, IOC President Thomas Bach sir and the crowd were cheering for me, I enjoyed and felt really good to perform in such a great atmosphere,” Neeraj said after the win.

Putting the title into perspective, Neeraj said, “This win is very important for our country. I feel we shouldn’t be only focusing on the events that happen after four or two years. Competitions like Diamond League Meet or Continental Tour are really good opportunities for athletes. It happens every year, and it gives us opportunities to do well. It really helps prepare well for the major tournaments because world-class athletes participate here. Performing well in these tournaments will also help Indian Athletics and the sport.

He further added, “I will be very happy to see more Indian athletes taking part in these competitions and I will be delighted to participate along with my fellow Indian athletes at a stage like this. Avinash Sable and Sreeshankar also participated in the Diamond League this year, so gradually our country is reaching this level and if we will perform better here, then it will help Indian athletics do well at bigger stages.”

Touching on his rehabilitation process, Neeraj said that the proper planning in rehab helped him recover smoothly.

“I had to skip Commonwealth Games due to groin injury, and I felt that I will have to end the season. But there wasn’t much pain, so I had the belief that I will recover before the tournament. I made some good throws in the training and was feeling well, hence we made the decision to compete here. I did my rehab in Germany with my coach and physio Ishaan Marwaha. It went really well. I had very limited time to prepare but the proper planning in rehab helped me recover quickly,” the star javelin thrower stated.

By virtue of this win, Neeraj has qualified for the Diamond League finals, which will be held in Zurich next month.

When asked about his plans for the finals, the Olympic Gold Medalist said, “Diamond League Finals in Zurich will be the season’s last competition, so the plan is to continue doing the same things which I’ve been doing. It’s only 10 days, I don’t have much time to do more or train extra. The focus will be to end the season on a positive note without any injury.”

Neeraj has also qualified for the 2023 World Championships, which will be held in Budapest, Hungary. With the throw, he breached the 85.20m qualifying mark.

The youngster from Haryana has had a successful 2022 season, having clinched historic Silver at World Athletics Championships as well as breaking the national record (89.30) at Stockholm Diamond League in July.

Reflecting on the successful season, Neeraj said, “It’s been a great year for me so far. I have gone over 89m thrice out of the five competitions, 88.3m in the World Championship, and managed to do well in Kuortane Games with 86.69m despite the challenging weather. So, the performance has been consistent and now the focus is on doing well in Zurich. Yes, everyone has been asking about 90m throw, it will happen when the time comes, I don’t have any pressure about it as such.”

“I’ve always believed that Diamond League is a big competition and I really like competing here. I don’t want to focus only on the Olympics, Commonwealth Games, Asian Games and World Championships because winning a Diamond League Trophy is also a big achievement for an athlete,” he concluded.