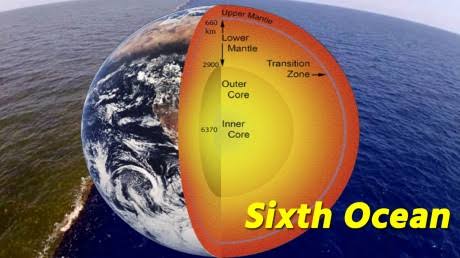 New Delhi: The Atlantic, Pacific, Indian, Arctic, and Southern Oceans are the five oceans that exist on the planet. Scientists from around the world have now discovered evidence of significant water content between the Earth’s upper and lower mantle.

Evidence supporting the idea that ocean water travels with subducting slabs and enters the transition zone was discovered during the investigation of an unique diamond that originated 660 kilometres beneath the Earth’s surface. The latest discoveries demonstrate that the planet’s interior participates in the water cycle.

The study by the German-Italian-American scientific team, which was published in the journal Nature, claims that the 660 kilometre border between the lower mantle and the mantle transition zone has influenced the interior structure and dynamics of Earth.

The data suggests that there is water in the transition zone (TZ), the layer that separates the upper and lower mantles of the Earth. Intense pressure of up to 23,000 bar at the boundary causes the crystalline structure of the olive-green mineral olivine to change. This pressure is present at a depth of 410 to 660 kilometres.

Around 70% of the Earth’s upper mantle is made up of olivine, commonly known as peridot. At a depth of roughly 410 kilometres, according to researchers, it undergoes a transformation into denser wadsleyite before becoming even denser ringwoodite at a distance of 520 kilometres.

Scientists analysed a diamond from Botswana that formed at 660 kilometers below the surface of the planet at the interface between the transition zone and the lower mantle. Analysis of the diamond using Raman spectroscopy and FTIR spectrometry revealed ringwoodite inclusions which exhibit a high water content.