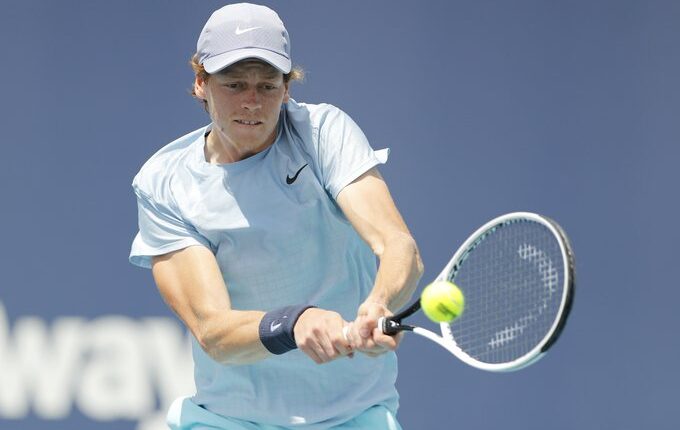 Innichen, in Italy, called the Pearl of the Dolomites, is one of the most popular skiing destinations. The most famous resident of Innichen is a young teen named Jannik Sinner who was brought up in Italy’s largely German-speaking province, South Tyrol. Sinner, at age 8, won a national level skiing championship but from age 13 concentrated solely on tennis. His coach since then is Ricardo Piatti, who also played a role in shaping the careers of Novak Djokovic and Maria Sharapova as a part-time coach, and has been full-time coach of both Milos Raonic and Ivan Ljubicic.

Born on the 16th of August, 2001, Sinner, who is currently a resident of Monte Carlo, is one of the most promising tennis talents of recent times. Let us have a look at some of his achievements in the last couple of years.

2019 Next Generation ATP Finals Winner; This was in November 2019. Defending champion Tsitsipas opted out as he had qualified for the 2019 ATP Finals as well. Sinner, at World number 95 and the youngest player in the top 100 was the Italian wildcard for this event, which comprises of top seven players in the ATP Race to Milan, with the 8th being an Italian wildcard. The tournament had started in 2017, and the 1st two Italian wildcards, namely Gianluigi Quinzi and Liam Caruana were both winless in the previous two editions. However, Sinner more than made up for them by winning the championships. In the finals, he defeated another highly promising player, Alex De Minaur. At the round-robin stage, he had defeated Tiafoe. For de Minaur, it was a second consecutive loss in the finals. He had lost to Tsitsipas the previous year as well.

ATP Newcomer of the Year Award 2019; This award is given to the Next Generation player who entered the top 100 for the first time and made maximum impact. Any player under 21 is on the Next Generation List. It was called the Newcomer of the Year award from 1975 to 2012 and prominent winners include John Mcenroe. Michael Chang, Patrick Rafter, Andy Roddick, Rafa Nadal and Milos Raonic. From 2013 to 2017 it was called ATP Star of tomorrow and winners include Sascha Zverev and Denis Shapovalov. From 2018 onwards it is called the ATP Newcomer of the year Award. The three winners so far are Alex De Minaur, Jannik Sinner and Carlos Alcaraz.

2020 Sofia Open; Defending champion Medvedev opted out and the top three seeds were Shapovalov, Felix, de Minaur, and Struff. However, it was Sinner who emerged as an unlikely winner, defeating Fucsovics and Husler in the 1st two rounds before stopping de Minaur in the QF. He then defeated Mannarino in the SF and Vasek Pospicil in the finals. He became the youngest ATP titleholder since 2008 when Nishikori had won the Delray Beach Open. This win enabled him to enter the top 40 of the world tennis rankings.

2020 French Open; Sinner had an excellent tournament and it took none other than Rafa Nadal to stop him in the QF. In the 1st round, he brushed aside Goffin before defeating B Bonzi and F Coria in the second and third rounds. In the 4th round, he defeated Sascha Zverev in four sets. Sinner took the fight to Nadal in the first set and was even in a position of serving for the 1st set. He also led by a break in the second. However, the legend, using his vast experience and tremendous form prevailed in straight sets. Nonetheless, it was a super performance from Sinner, considering that just a year back he was not even ranked high enough to participate in the qualifiers. Nadal praised him as “a very very young talent, with a lot of power and great shots”. Sinner was calm in defeat and said that “I had my chances in the first two sets, but unfortunately I did not use them. He deserves where he is. Congrats to him”. Overall, Sinner received praise not just for his power but for his calm demeanor, serve followed by punishing forehand or backhand, overall touch play, and ability to innovate and improvise as well. He became the youngest Quarter-finalist on debut since Nadal in 2005 and also became the youngest Quarter-finalist since Djokovic in 2006.

Miami Masters 2021; This was just the 3rd Masters 1000 tournament of his career. Sinner became just the 4th teen to reach the final of the Miami Masters, and the previous three, namely Agassi, Nadal, and Djokovic had all gone on to be world number 1. At Miami, defeated Hugo Gaston in the first round and the dangerous Khachanov in the second. Ruusovuori and the in-form Bublik were his next two victims before he faced Agut in the SF. Agut had just defeated Medvedev and he took the 1st set off Sinner before Sinner came back to win the second and third and enter the final.
In the final, however, nerves got the better of the teen. Serving for the set at 6-5, Sinner was broken at love. He then played a horror tiebreak to lose the 1st set. Things did not improve and Hurkacz got a double break to go up 4 Nil. Sinner got one break back, but the Hurkacz held his nerve and held his next two serves to close out the match 7-6, 6-4 and win his 1st Masters 1000 tournament. He will now be ranked World Number 16, while Sinner too will reach his highest ever ranking of 21. There are now 10 Italians in the world’s top 100, and Sinner at 21 is the highest-ranked amongst them

Progress over the years; Sinner was unranked in 2018. He finished 2019 at rank 78 and 2020 at rank 37. Can he break into the top ten by the end of 2021? For that, he has to repeat his Grand Slam performance at the French Open and drastically improve at Wimbledon and the US Open where he has lost thrice overall in the 1st round itself. At the US Open, he led Khachanov by 2 sets to love but finally lost in a 5th set tie-break. Towards the end of the match, he was seen to be cramping, but interestingly, his coach says, that it was due to mental stress and lack of hydration rather than physical fitness. It is these aspects he will have to note and improve, especially in the Grand Slams, and against the top ten and top 4 players.

What do big guns say about him? Let us see the opinion Chris Evert, John Mcenroe, Roger Federer, and Rafa Nadal have about the teen.

Chris Evert; “The maturity that he has, has really propelled him at this point, and he plays like he belongs on the big stage. He doesn’t have any fear. I love the demeanor that he has on the court, apart from his game. and I saw that with Federer and Nadal too, at a young age, with the current champions, and I see a familiarity there”

John Mcenroe; “Sinner is one of the most talented kids I have seen in the last ten years and he has the potential to win numerous Grand Slams”

Roger Federer, “What I like about him is that he has almost the same speed of shooting, from the backhand and forehand. I think we will see so much more from him. He’s an exciting guy and super-sweet kid which I always love to see”.

Rafa Nadal; “He has everything to achieve a great tennis career. The only thing that he needs to do, in my opinion, is to have the right people around and work”.

By the way, who did Rafa Nadal and Carlos Moya choose to be Nadal’s quarantine hitting partner for 14 days? It was none other than Sinner. Clearly, this too is a recognition.

The latest Rolex Brand Ambassador is none other than Jannik Sinner. Will the latest tennis sensation go on to be a Grand Slam champion in the future? He certainly has the potential, but will he translate it to reality. The priorities of his coach are clear, “I have coached two world number 3’s, Milos Raonic and Ivan Ljubicic, now I want a world Number One”. Time will tell whether the dreams of his coach and the prediction of Mcenroe come true or not.

NADAV LAPID – A SELF-GOAL by INDIA

Paraali, Paroles and a Fallen Footbridge – The Vishwa Guru has a lot on its Plate

Tony Soprano as Schrodinger’s Cat – How the Sopranos Ends!

Sir Garry Sobers, “King Cricket” – A Man For All Positions And Every Kind Of Job